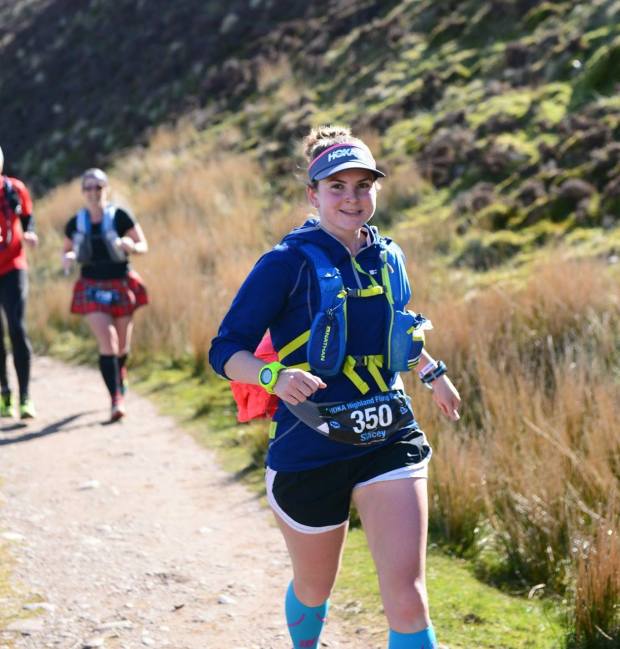 The night before the race I was feeling extremely excited, happy and impatient. It had been a long time since I last worked this hard for something and anticipated pushing my limits. It is a great feeling to attempt to achieve something that you have no idea if you can possibly succeed at.

Max, however, was having a evening full of self doubt, apprehension and fear of disappointment. Still injured he was unsure he would finish the race. I asked him to run with me until Rowerdennen (Mile 27) and then see how his ankle felt. At least he would have run a marathon.

Three miles in, Max became impatient with my 11 min mile pace and with a kiss good bye he ran off into the wilderness. I would not see him again for another 12 hours and 20 minutes.

Nervous to be running into the unknown alone I spent the next 2 miles catching up with a group of guys (Mike, Norrie, Neil and Martyn) Max and I had shared a dinner with when staying in Tyndrum a month earlier in our trip. As we all ran together other runners came and went, sometimes running with us for tens of miles, some only a couple hundred metres, but I remember everyone I spoke to in the race.

The running up to around 16 miles was relatively easy, the weather was gorgeous, but as I reached Conic hill I began to feel unexpectedly awful. A calm and logical voice in my mind let me know that maybe I needed to deal with this. I carried an emergency hydration tablet in my pack so I added it to my water and drank it as I climbed the 500m ascent. I instantly felt better. Later in the race Neil will drop out at mile 44 due to cramps, it is important to take on salts early on.

I had written out a race plan, with timings, and found I had arrived at the first check point (Balmaha) an hour ahead of schedule. I was a bit concerned, but felt awesome so did not worry too much. I met the Beta running team support there and as I didn’t have my own support they helped me refill my bottles and gave me an update on Max’s progress. I found it heart warming entering the checkpoints, seeing all the volunteers and support and families there for the runners. The checkpoints are a place where you are in amongst large crowds and almost a connection to society again after running in near seclusion for hours. The next stage of the race was 7.5 miles to the half waypoint. However, this took nearly an hour LONGER than I had planned due to the undulating terrain. Thankfully I was an hour up on my schedule so as I arrived into Rowerdennen and well in front of cut off.

Running with the guys meant I had to be super fast out of the check points when grabbing my drop bags and tended to stuff my food into my bum bag and then carrying extra with me. The guys would wait for me, but obviously would not wait while I sat and had a picnic. This was excellent as it is all too easy to lose time at checkpoints.

The next section of the course was unknown territory, this was the furthest I had ever run, but I found running OK up to mile 34, then it started to get hard. By mile 37 I was walking, as was everyone else around me. Conversation halted and the group began to split up, by mile 39 we were no longer running together. Mike had pushed on and Neil was cramping badly.  Walking hurt as much as running, so I started running again. The final check point was Beinglas farm, I had told myself if I got there, then I could finish. On arrival I knew I was empty and 12 miles was still a long distance to cover, and it was up hill. At the previous check point my drop bag had been misplaced, so I was extremely relieved to find my final bag was there. After downing a coconut water, 2 cups of flat coke, a bottle of water and a diaroltye I began eating whatever was handed to me, including crisps, frubes and cake. The support for another runner adopted me, filling my water, feeding me and tidying up my rubbish. He was so lovely and told me to call him Uncle Jack! I bumped into the Beta running team again, but they had not seen Max so I didn’t get an update. It had now been 10 hours since we left Milngavie. I accidently stayed at the checkpoint too long, missing Martyn and Neil leaving. Eventually I resigned to the fact I had to leave the food and friendly faces, and leave alone.

I put my iPod on and got my head down and walked. My right IT band was causing a lot of shooting pain making my leg not work too well, I sort of had to swing it to walk. At this point of the race everyone offers up words of support for each other, even though they themselves feel just as much hurt as you. I was having a terribly low moment and a lot of negative thoughts, worrying Max might not be ok, and began to feel overly emotional. I phoned Max and as soon as he told me he had already finished (!?!) my mood lightened and I was filled with determination to finish and see him again. With Macklemore’s ‘Can’t hold us’ on my iPod I took a caffeine gel and ran! 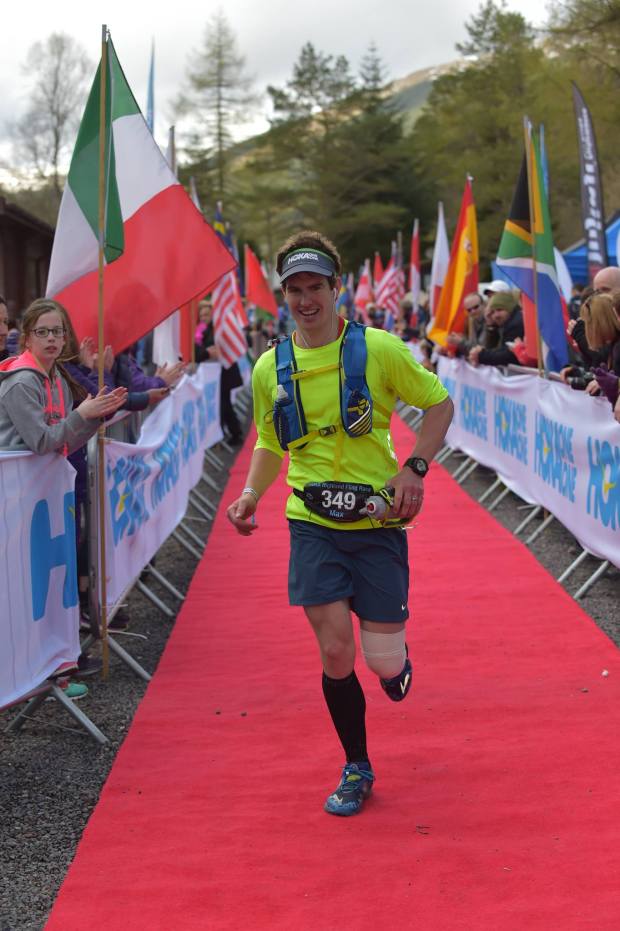 I started running 8 min miles through the ‘roller-coaster’ forest 5 miles out of Tyndrum shouting internally at myself ‘IT IS ONLY PAIN!’ At 3 miles to go I called Max to tell him I was 30 minutes away and downed two more gels.

My chest hurt. I did not want to tell anyone I had chest pain, at 2 miles to go I was finishing this race. I passed Norrie (I had not seen him since the sumit of Conic Hill) and met Martyn who told my Neil had dropped out. I was deeply gutted for him. I started running again desperate to see the finish, and rounded a corner to hear the sound of bagpipes and saw Neil in his normal clothes ready to cheer his teammates in. Holding down the sobs I arrived at the red carpet and searched the crowd for Max. I finished the race, promptly burst into tears and was greeted by hugs, medals, soup, champagne and then Max stuffed me into a shower and then into a physio tent to sort my ITB.

Absolute relief to reach the finish*

It was a truly amazing experience. I am so grateful to the people I met and ran with and everyone involved in the organization of the Hoka Highland Fling 53 mile Race.

10. All you need to finish an ultra is to turn up with some consistent running in the bank, and decide before you start that you will finish. 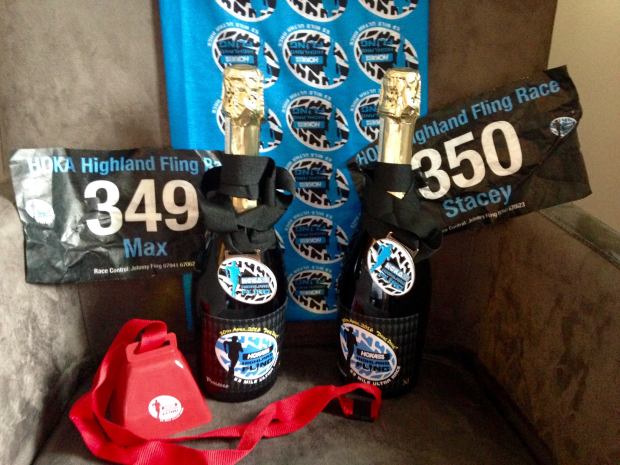 This site uses Akismet to reduce spam. Learn how your comment data is processed.

The clouds last night! #home #scotland #cloudwatching #daydreaming
9 miles checked off on an early 6am run for the @centurionrunning #onecommunity 100mile week. Absolutely stunning morning here! #scotland #oban
Two day’s ago went for a cycle to Isle of Eriska. An island we had never visited before with a bridge to it only 4 miles from our home. Unfortunately, the island was locked! But did not stop us, just walked across through the low tide. ** EDIT: to clarify as seen this post was not well communicated, we walked barefoot across 20m of shin deep water to touch the beach on the other side with bikes left at the gate. We did not explore the island (tho I believe we are in our right to). This island has the hotel and spa on it which is empty and we reported the locked gate to the council. No one was endangered and no lockdown rules were ignored. Feel free to check the Strava route. ** Looking outside now hard to remember sunshine 😂 been in lockdown through end of winter, spring and now we enter the summer wet and stormy season! #scotland #lockdown #cycling #4seasons
This week is Mental Health Awareness week. At WayOutside we aim to support those working with us and attending our events, trips and running programs to welcome them the best we can. We know how difficult it can be for anyone, and even more so for those struggling with their mental health, to try something new, make a change, join an exercise group or to put themselves out there in front of others. We understand fear of failure, lack of self-belief, body image challenges, low confidence, social anxiety, not feeling deserving or good enough. We are here for our runners every step. A core belief of WayOutside is that the outdoors is for everybody and every body. Where ever you are in your training journey we can and want to support you to make the change you seek, but ultimately we want you to find joy moving outside whether hiking, walking, running, swimming or cycling. Stacey is a mental health ‘I’m here’ advocate with @jogscotland and also a trained @nhsscotland mental health first aider. Here is what she says, “I have suffered from anxiety and panic attacks since my early 20s. For me my physical health only supports my mental health. I use running and outdoor swimming to relax, clear my head and keep anxiety in check. Being in nature connects me with the world and reminds me what is most important. I love running, walking and swimming with others too. You build strong bonds and trust with those you adventure with. A regular sea swim meet-up group becomes your support network. Training is not a punishment, it’s a reward. When I train for an event or hike a mountain I am reminded how strong my body is and I feel proud of it. There are so many messages telling us to look a certain way, I have belly rolls and cellulite, they do not stop me or hold me back in the outdoors. In fact extra weight only helps me in winter and winter swimming! I can stay in the water far longer!” We are running a free virtual Sofa 2 Summit (compete beginner) and Run Longer program (can run for 30mins) on Facebook. Do join us in link in profile! Check the comment as posting some testimonials from some of our Sofa 2 Summit graduates #running #mentalhealth #mentalhealthawareness
Feeling grateful, the view stuns me every time! 🌅 🏡 🌁🌄#home #scotland #sunset #awindowonscotland @wildaboutargyll #wildargyll
The attack on the ivy continues. It’s been an epic and ongoing battle of lockdown between Max and the mighty ivy. Max has reclaimed 80% of the ivy stronghold, but the ivy continues unabated in its quest. The attacks come from ground and air as the ivy takes to neighbouring trees for refuge!! We will take back our garden! #gardening #creepingivy #scotland